When compared with traditional forms of entertainment, how many users are currently already using VR gear to watch adult entertainment?

It’s impossible to provide accurate data. Anyone who says they have that data is being somewhat disingenuous. The market at this point is very, very small because the number of consumers in possession of a VR headset is infinitesimal, compared to smartphones, desktops and tablet computers. Broadly, it’s important to remember that, for all the fanfare, hype and truly inspiring VR programming available, VR as a tech is still incredibly embryonic. All of the excitement it garners is worthwhile and valid and appropriate, but what we’re most excited about, what’s worthy of all that excitement is the signals splintering off the tech. It’s not about what’s here now. 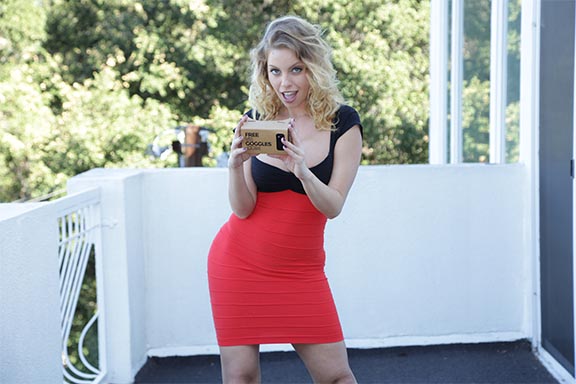 How will this change in the near future? When do you expect that VR will reach user numbers close to what we see today with computers, TV or smartphones?

The release of PlayStation VR is worth celebrating. Google Daydream, even more so. The levee breaks once eye-tracking comes to town. That makes foveated rendering possible. And once video resolution can be managed in a manner that does not require everything in your field of view to be displayed at max resolution, the demands on processing power will drop enormously, and many more consumers will be in the position to afford higher-end devices. When will VR gear be as commonplace as computers, TVs or smartphones? I think we’re a decades out, honestly. Consider that we all know one or two people who live without TV, live without a smartphone. They’re curiosities. They’re noteworthy. We’re still at a point where it’s noteworthy if someone owns a VR device.

At BaDoinkVR, we were the first to give away Google Cardboard with every subscription to our VR porn site, but these are, to put it colloquially, gateway drugs. They don’t deserve a place on the shelf alongside your other gadgets. They’re here to give you a taste, and encourage you to purchase something better—like Gear VR, Oculus Rift, HTC Vive. That’s what makes the release of Google Daydream so exciting. Most people are not going to jump from cardboard to Oculus Rift or HTC Vive. They’ll jump to a mid-range device. Up until recently, that meant Gear VR, and Gear VR,  good as it is, works with only a few Samsung phones. With Google Daydream, we see many, many more manufacturers agreeing to release phones supporting the platform. That gives the entire market a nice kick.

What art the minimum requirements a VR headset and the hardware should have to create an enjoyable experience for the user?

Other solutions from Oculus, Sony or HTC are far more pricy. Does the user see the difference? And will he be willing to pay the higher price to watch adult entertainment on these devices?