Most of the VR movies you are offering are 180° movies. By when do you think you will have a higher amount of 360 ° movies?

That’s difficult to say for a couple of reasons. We are shooting 180° 3D stereoscopic videos because the consumer is not requesting 360° versions. Our member base is very vocal. We know this because we maintain a feedback forum for members behind the paywall. The 360° 3D stereoscopic videos we shoot are great for trade shows; they convey the WOW factor, but the fact is, from a practical standpoint, most users are lying prostrate when watching our videos, so seeing what’s going on behind them is not so interesting. Further, 360° 3D stereoscopic videos are more expensive to produce, and because of limitations in camera and stitching technology, the quality is never as good as you want it to be, never as good as what’s possible at 180°. 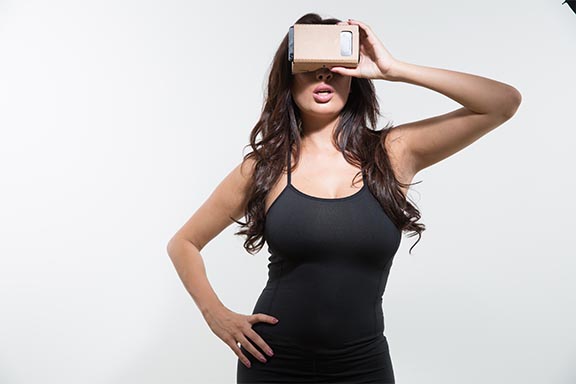 We can’t use a camera like the Nokio Ozo—as one example—because the frame-rate on a camera like that is only 30fps. That’s fine if you’re shooting landscapes, but if the subject matter is a few inches away from you, and indulging in speedy gyrations, it’s insufficient, and bouts of VR sickness would be pervasive.

What improvements do you see for the VR technique in the upcoming 5 years?

Also regarding interactive tools as sextoys?

Virtual reality is all about presence, or telepresence, the feeling of being completely immersed in an experience. In order to be immersed in an experience, all of one’s senses must be stimulated. With VR videos, no matter how great they are, we are only stimulating what one sees and hears. It does not take into account touch, taste, smell. A product like Kiiroo’s Onyx provides tactile sensation, and you will see great improvements in the likes of the Onyx in the future, as well as solutions that address the other two, as yet unaddressed, senses.