Not so easy, it turned out. Every male porn star has washboard abs these days. So we found someone last minute with an appropriate physique. Unfortunately, he was unable to maintain an erection during the shoot. On the one hand, this was disappointing, as that meant that Melania Trump and Sarah Palin had to pretty much do everything. On the other hand, it seemed appropriate, the fact that the candidate could not get it up. Anyway, we also flew in a proper Donald Trump impersonator from Florida to provide overdubs for the VR scene, and to star in this parody of a press conference in which he reveals that a VR sex tape was leaked, that he’s going to sue everyone, and that the video is hyuuuuge.

And here’s the original script for the press conference. Warning: It changed pretty dramatically on the day of shooting:

Podium with Trump regalia. Behind the podium, a US flag and a California flag. Behind the flag, a curtain suggesting that there is a stage behind the curtain. An expressionless SECRET SERVICE AGENT in sunglasses stands to the right of the podium. A microphone on the podium sits silently. A Gear VR headset brandished with BaDoinkVR logo is somewhere in arm’s reach of the podium, but out of sight.

Dressing the podium, signage that reads “TRUMP MAKE AMERICA GAPE AGAIN”. In the foreground, the backs of heads of SUPPORTERS. They clap, cheer, mutter and wave TRUMP CAMPAIGN POSTERS.

After we establish, O/S an EMCEE is heard.

EMCEE
Ladies and Gentlemen, the next president of the United States…Donald J. Trump!

The supporters grow more impassioned, getting a little louder, waving their signs with more enthusiasm. Trump stands behind the podium, nodding, smiling, waving at the crowd. Melania stands to his left, facing the crowd, smiling.

DONALD TRUMP
Unbelievable. Wow. I love you. I love, Los Angeles. Love Love Love. Thank you very much. What an honor.

Trump jovially motions for the crowd to relax, settle down. They obey. The cheering dies down.

Melania turns to face her husband so she, and her bust, is in profile.

DONALD TRUMP
(gazing at Melania’s attributes) Will you look at that. I mean, come on. Very nice, sweetheart.(turns back to crowd) Best $10,000 I ever spent. It’s true. And you’re going to see more of them. A lot more. From my time in Hollywood, I know that’s called a teaser, isn’t it. It is. I spent a lot of time in Hollywood. A lot of friends out here. Great people. This isn’t going to come as a shock to anyone, but Melania and I have a lot of fun in the bedroom. Don’t we, sweetheart? We do. And if you don’t believe that, you will soon. You will. Because I was informed a couple of hours ago that a teeny tiny sex tape was leaked on Porbhub.

Trump pauses as the crowd laughs.

DONALD TRUMP
And you’re going to love it, trust me. You will. Especially if you’re an evangelical. I love you, Evangelicals. Believe me. I love you. This is the greatest sex tape in the world. And it’s very advanced. Very smart. It’s virtual reality. So you need a pair of goggles. Like this.

Trump picks up a Gear VR headset brandished with BADOINKVR logo and presses them to his head.

DONALD TRUMP
Don’t I look handsome in these? And presidential? Melania? How handsome am I?

Trump removes the goggles from his eyes, and the crowd applauds as he places them back on the podium. 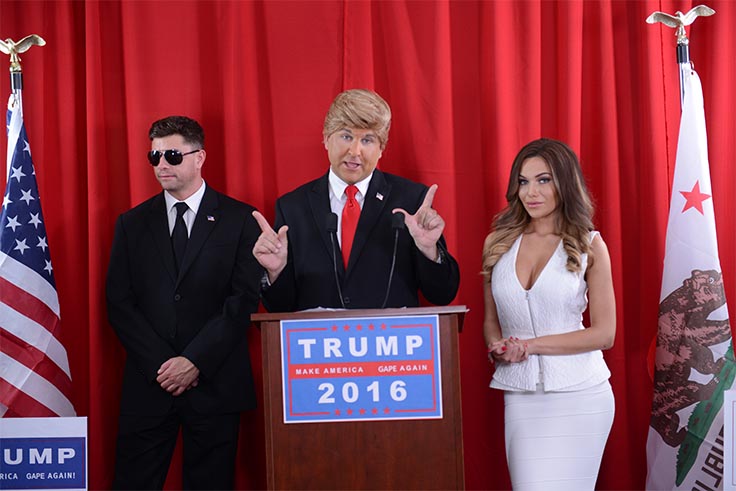 DONALD TRUMP
Great. Really, really great. But I am going to sue Pornhub for all the money they have. And I’m going to sue BaDoinkVR. And I’m going to sue Kink.com while I’m at it. And I’ll win. I’ll win all the lawsuits. Trust me. I always win. I do. And one more thing: We’re still going to build that wall, and it’s going to be a great one. So when you watch this tape, and you will. You’ll love it. It’s great. When you watch the tape you may see somebody crawling across a southern border or two, but that border is not Mexico. If you know what I mean. And I know you do. When the media calls me sexist I have to laugh. I employ so many women. And they’re great. This tape proves something I’ve been saying all along: I won the battle of the sexes in a great big landslide.

Trump pauses as the crowd applauds.

The crowd cheers, claps, waves their campaign posters. Donald exits stage left, pinching Melania’s ass as he passes her. She follows him out of frame. As the Secret Service man passes the podium to exit stage left, we FADE.

Join the discussion and tell us your opinion.