Latest from the Front 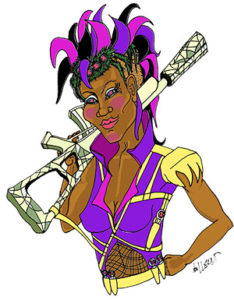 It’s been quite a while since I’ve updated this blog. That was more or less by design. I tendered my resignation at CM Productions, LLC. My last day as CEO was December 31st, 2016. There were numerous factors that went into the decision. Much of it had to do with age, and my desire to consider pivoting to something new. I’m in my mid 40s. Pivoting after 50. One could break a hip. I’ve spent the last few months resting, making a concerted effort to learn Spanish, seeing a lot of the Barcelona I’ve simply  been passing by since moving here six years ago.

On the VR front, I’ve been relatively quiet, although I’ve been helping out a young woman based in Los Angeles who calls herself Logan Legend in an advisory capacity. She was in Berlin for one of my last panels as CEO, and she  explained that she was really enjoying our new site, VRCosplayX.com, which, if you read this post here, or have visited the site, you already know something about.

That’s her self-portrait right there…how she’d like to look anyway. Her avatar, as the kids say. And the name of the blog is VRCosplayMate.com, as touched on in my last post in January.